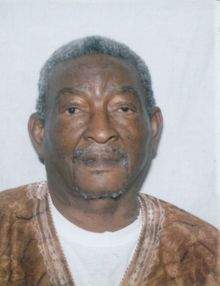 Alfred Woke Bimbi-Sara. Lewis, 81, of Owensboro, KY passed away January 11, 2021 at Owensboro Health Regional Hospital. He was born in Freetown, Sierra Leone on May 10, 1939 to the late Evelyn Lewis and Nadi Kolleh-Lewis.

Alfred was the last surviving grandson of the late Hon Sir Samuel Lewis who was the first African to be knighted and also the first mayor of Freetown, Sierra Leone. He emigrated to Kentucky in 1973 as a young student and studied Electrical Engineering at then Brescia College, now Brescia University. Alfred is a proud alumni of the St. Anthony Primary and St. Edwards Secondary school, Freetown, Sierra Leone.

He made Kentucky his true home away from home living here for 48 years straight. Alfred was a genius in anything electrical which was his true passion besides his genuine kindness to his fellow humans. He was an outstanding member in Owensboro community and was awarded the Community awards from the governor of Kentucky where he was recognized for his efforts where he received The Presidents Volunteer service award and recognition from the governor if Kentucky for community volunteerism. Alfred became a true son of Kentucky and made Owensboro his home. He is an avid lover of African music and was the man with the latest Congolese songs in his youthful days for the party to start. Prior to coming to the U.S, he also worked as a nurse for the Connaught Hospital. He worked at National Linen in Kentucky until he retired and of the Catholic Faith.

The funeral Mass will be 10am Saturday at Blessed Mother Catholic Church. Entombment will be in Rosehill Cemetery. Visitation will be 7:00 p.m. - 8:00 p.m. Friday at Glenn Funeral Home and Crematory.

All who attend the visitation and Funeral Mass for Mr. Lewis shall be within current health and safety directive and wear personal protective masks and enter the doors under the carport on the Triplett Street side of the building.