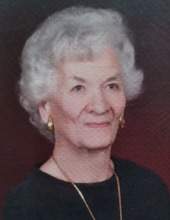 Annette Cornell, 97, passed away November 16, 2021 at her home in Lexington. Mrs. Cornell was born May 8, 1924 in Owensboro, KY to the late John Graham Smith and Helen Wilson Smith. She was preceded in death by her husband, Troy Leslie Cornell.

She was a 1942 graduate of Daviess County High School and married Troy Cornell three days after her 18th birthday, just months before he served in the Navy Seabees Construction Battalion in the Pacific until the end of the war. During the war, Mrs. Cornell worked at Ken-Rad and then at Arnold Jewelers.

After the war, Troy and Annette built their home in Masonville. They were charter members of Masonville Baptist Church where she served faithfully until she moved to Lexington in 2015. The 70 years she lived in Masonville, Mrs. Cornell baked pies and delivered home-cooked meals to shut-ins. When needed, she was happy to work beside her husband, baking pies at Cornell’s Restaurant. People who travelled U.S. 231 called her home “The Lighthouse of Masonville” because of the brightly-lit Aladdin lamps that shone in all of the windows. Christmas did not officially begin in Masonville until Annette hung the little red lights and red cellophane wreaths in every window every year until she moved to Lexington, when the house on U.S. 231 went dark.

In lieu of flowers, the family would appreciate donations to Masonville Baptist Church or NAMI of Owensboro. Also, Mrs. Cornell would probably tell you to just bake a pie and give it to someone near you who needs to know he or she is cared for and loved.