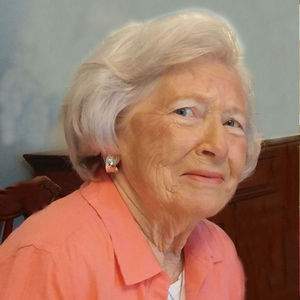 Bette Lou Hanberry, 89, of Owensboro, passed away Wednesday, May 6, 2020 at Norton Hospital in Louisville. She was born in Logan County, KY to the late Lucien and Gertrude Sears Porter.

In 1952, Bette earned a B.A. in music from Georgetown College, where she met H. Carrol (Hobie) Hanberry. She taught many children to play piano throughout her lifetime. Mrs. Hanberry was an active member of First Baptist Church where she served as a Sunday school teacher and with the Women's Missionary Union. Bette volunteered at Kentucky Baptist Children's Homes (now Sunrise Children's Services) and was a former member of Buena Vista Baptist Church. She enjoyed playing bridge with friends, needlepointing and traveling with her husband to Europe, West Coast, Canada, Hawaii and New York City at Christmas.

She was preceded in death by her husband of 64 years, H. Carrol (Hobie) Hanberry in 2016; a grandson, Christopher Williams; sisters, Ann Tyree and Frances Robbins; and a brother, Hugh Porter.

In compliance with health and safety directives, services for Mrs. Hanberry will be private. Burial will be at Rosehill Cemetery.

The family would like to offer a special thank you to the staff at The Forum, for the wonderful care and support provided during Mrs. Hanberry's stay.