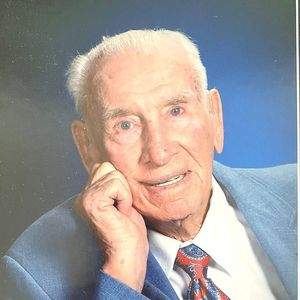 Charles B. Kimmel, 101, of Owensboro, died Wednesday, June 9, 2021 at his home under the care of Hospice of Western Kentucky. The Muhlenberg County native was born May 14, 1920 to the late Wood and Clara Bradley Kimmel. Mr. Kimmel served in the U.S. Army during WWII and participated in 7 major invasions. After attending Owensboro Vo-Tech, he became a licensed electrician by trade working for many contractors. Charles loved playing golf and found great enjoyment as a "snow-bird" traveling to Florida every winter. He was a very generous person with a great work ethic. Charles was a 32nd degree Mason since 1954 of Owensboro Lodge 130.

The family would like to express special appreciation to the VFW (Post 696) and Hospice of Western Kentucky.

The funeral service for Charles Kimmel will be 12:00 Saturday at Glenn Funeral Home and Crematory. Visitation will be Friday from 3:00 until 7:00 pm with Masonic Rites at 6:30 pm and Saturday from 11:00 am until 12:00. Burial with military honors will be in Rosehill Cemetery.

Expressions of sympathy may take the form of contributions to Hospice of W. Kentucky, 3419 Wathen's Crossing Owensboro, KY 42301.

Memories and condolences for the family of Charles Kimmel may be left at www.glenncares.com