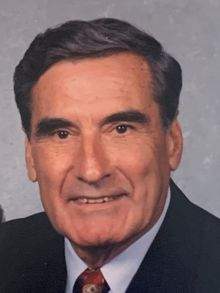 Clement Leslie Adams, 91, of Owensboro, passed away Friday, April 17, 2020, at The Stratford in Indianapolis, Indiana. He was born on July 15, 1928, in Warwickshire, England, to the late Ernest Leslie and Lavinia Adams (née Millward).

Mr. Adams was a British Army veteran, serving from 1946 to 1948, during which time he was stationed principally in Egypt. He served in the same regiment in which his father had fought in World War I. Mr. Adams's adult life was significantly influenced by his teenage years spent enduring the hardships inflicted by World War II on his native England and living through the bombings of Coventry and Birmingham.

In 1949, Mr. Adams immigrated to the United States, where he met and married his beloved wife "Jennie." He worked in the oil & gas business, eventually starting his own business, Tri-State Logging Company. He jointly owned and operated this successful oil & gas logging and perforating service business for many years until his retirement.

Mr. Adams was a long-time member of First Baptist Church, where he belonged to the Maverick Sunday School Class. He was also a member of Owensboro Country Club, the YMCA, and Harbour Ridge Yacht and Country Club in Palm City, Florida.

In addition to his parents, he was preceded in death by a sister, Gwen Barker, and brothers, Alex and Robert Adams.

Mr. Adams is survived by his wife of 68 years, Janet Rae Ritsch Adams; sons, Alexander S. Adams (Cynthia) of Indianapolis, Indiana, and Eric L. Adams of Houston, Texas; grandchildren, Zachary, Forrest, Caroline, and Anne; great-grandchild, Emma; and a sister, Mary Smith of Solihull, England. Mr. Adams will be fondly remembered by his family for his strength, integrity, good humor, and zest for life.

The private service will be held at First Baptist Church in Owensboro.
Public visitation will be Friday, May 22 from 3:00 until 5:00 PM at Glenn Funeral Home and Crematory. Entombment will be at Rosehill Cemetery. The number of those attending the visitation or funeral service for Mr.Adams shall be within current health and safety directives. Family and friends shall wear appropriate personal protective masks and enter the doors near the flagpole on the Breckenridge Street side of the building.

Memories and condolences for the family of Clement Leslie Adams may be shared at www.glenncares.com.