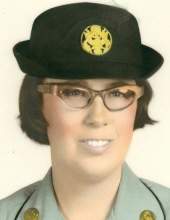 Debra Lee Cole Sands, 72, of Owensboro, passed away on Friday, January 15, 2021 while in the care of Hospice of Western Kentucky. She was born April 24, 1948 in Michigan to the late Delbert and Margaret Cole. She was a member of Glenville Baptist Church and retired from Walmart. Debra was a U. S. Army veteran having served in the Women's Army Corps from 1969-1972. In addition to her parents, Debra was preceded in death by her husband, William G. Sands Jr., on October 31, 2017; and a son, James Cole Sands, on May 5, 2018.

Services will be private with burial in Rosehill Cemetery.