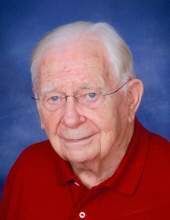 Donald K. Gross, 92, of Owensboro passed away on Wednesday, April 8, 2020 at Western Kentucky Veterans Center in Hanson. He was born in Evansville, Indiana on April, 18, 1927, to the late Jacob O. and Christine Jones Gross. Don spent his early life in Evansville, and at his grandparents farm in Western Daviess County. Don was a U.S. Army veteran and served at the end of WWII. After he returned home from WWII, he worked at J.C. Penny selling men’s suits for a brief time. In 1944, he went to work for G.E. where he spent the rest of his career as a unit supervisor in the shipping department. In 1945, Don married Lena Lyle of Hartford, KY. While Don was employed at G.E., he attended Kentucky Wesleyan College. Both Don and Lena worked at G. E. until 1989 when they retired. Don and Lena were members of Masonville Methodist Church for many years where they were very active. Don took great pride in his home and was constantly landscaping his yard with flowers, new shrubs, and trees.

Don was preceded in death by his parents; wife Lena; his brother, Paul and wife, Frances; and sister-in-law, Lela Davis.

Don is survived by his nephew, Dr. Michael Gross and his wife, Ellen of Cadiz; his cousin Hester Cronin and her husband, Dave; and his guardian and friend, Chuck Morgan, all of Owensboro.

In compliance with health and public safety directives, private family services will be held at Rosehill Cemetery Chapel.