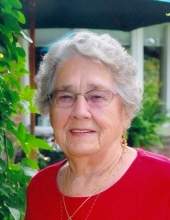 
Dorothy D. Seaton Ashley, 96, of Owensboro left her Earthly home on Monday, January 31, 2022 to join her heavenly family that was waiting to receive her into eternal peace. She was born on February 4, 1925 in Owensboro to the late Luther & Bess Renfrow Daugherty. Dorothy retired after 16 years from Hillcrest Nursing Home. Her favorite pastime was her roses, vegetable garden and canning. She had a green thumb, she could grow anything. She also enjoyed HGTV, Rolling Pin's coconut long johns and watching General Hospital daily. We all will miss her fried apple pies she would make for family birthdays, her homemade canned plum, grape jelly and strawberry jam. We all enjoyed her fried green tomatoes. She loved talking on the phone with her kids and grandkids all over the country until Shannon called. Dorothy was a member of Owensboro Christian Church. She loved socializing and worshiping on Sunday. She will be missed greatly by her family, friends, grandchildren, great-grandchildren, and great-great-grandchildren.

Funeral services will be at 1 p.m. on Friday at James H. Davis Funeral Home & Crematory. Burial will be in Elmwood Cemetery. Visitation is from 2 to 7 p.m. on Thursday and after 11 a.m. on Friday at the funeral home.

The family would like to thank her neighbors, John and Marla Storm, who have always been there for her; Nikki Hagerman for always spending quality time with her shopping and having lunch; Dubby Schwartz, a special friend; and Jennifer Hinch, her caregiver, for taking such good care of her. They instantly became very special friends. She had the ability to make her feel very special and laugh out loud.

In lieu of flowers, the family asks that donations to made to Hospice of Western Kentucky, 3419 Wathens Crossing, Owensboro, KY 42301. They showed grace and compassion to not only Dorothy but to the family that surrounded her during her last days.