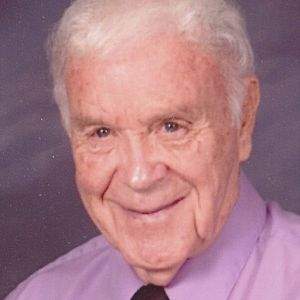 Ebbert "Ebb" Freeman Peacock, 91, of Owensboro, passed away peacefully January 26, 2021, at Owensboro Health Regional Hospital. He was born February 16, 1929, in Owensboro, to the late Rudolph and Lena Stewart Peacock. Ebb was also preceded in death by his siblings, Daphnea, Faye, Chuck, Rudy, and Bobby.

He was a member of Breckinridge Street United Methodist Church. Ebb was the owner of Peacock Insurance and Real-Estate, and co-owner of Alice's Stout Shop. He loved the outdoors and in his younger years enjoyed golf, archery, fishing, and hunting with his special bird dog, Bill.

Ebb was a Navy veteran of the Korean War, earning several medals during his service. He was proud of his many responsibilities on his ship, the USS Mansfield. Ebb often reminded his family of the three years, nine months, and twenty-seven days he served his country.

The family would like to express their gratitude to the doctors, nurses, and staff in the COVID unit at the hospital for their care and compassion during this difficult time.

Ebb was always ready to lend a helping hand to those who needed it. He was previously involved in several civic organizations and had a special place in his heart for children. Expressions of sympathy may take the form of donations to the Goodfellows Club of Owensboro, 401 Frederica Street B-203, Owensboro, KY 42301; or to St. Jude Children's Research Hospital, 501 St. Jude Place, Memphis, TN 38105.

A private family service will be held at a later date. Care by Glenn Funeral Home and Crematory.

Memories and messages of condolence for the family of Ebb Peacock may be offered online at www.glenncares.com.