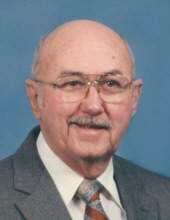 Ellis "Ray" Laney, 95, of Owensboro, passed away on Monday, November 29, 2021 while under the care of Hospice of Western Kentucky. He was born September 14, 1926 in Owensboro to the late Roy and Ruby Bollinger Laney. Ray worked for 37 years for Singer Sewing Company and later worked part-time at Windridge Country Club in the golf shop. He was a member of Dawson Baptist Church and served in the U.S. Air Force veteran during World War II in Guam. Ray enjoyed yard work, cigars, bluegrass music, and pedicures with his granddaughter. He loved spending time with his great-grandkids.

In addition to his parents, he was preceded in death by his wife, Rayola Laney; and a sister, Coy Bryant.

Funeral services will be at 2 p.m. on Friday in the chapel at James H. Davis Funeral Home & Crematory. Entombment will follow at Rosehill Cemetery Mausoleum. Visitation is from 12 p.m. to 2 p.m. on Friday the funeral home.

Expressions of sympathy may take the form of donations to the Heartford House, Hospice of Western Kentucky, 3419 Wathens Crossing, Owensboro, KY 42301.