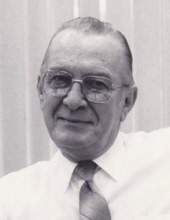 Finley William "Bill" Phillips, 89, of Owensboro, Kentucky passed away on October 21, 2021 at Baptist East Hospital in Elizabethtown. He was born on October 18, 1932 in Paxton, Illinois to the late Cameron & Eunice Phillips. Bill was retired as an accountant from the former Texas Gas Transmission Company. Bill graduated from high school in Rantoul, Illinois, from Officer Candidate School in Ft. Sill, Oklahoma, and from the University of Illinois. He served as a Second Lieutenant in the Army and was awarded the National Defense Service Medal, Korean Service Medal, and the United Nations Service Medal (Korea).

He was preceded in death by his daughter, Lorena Lea Phillips; and six brothers, Kenneth, Richard, Roy, Cameron Jr., Charles, and Patrick Phillips.

Private graveside service will be held at Elmwood Cemetery. James H. Davis Funeral Home & Crematory is in charge of arrangements.