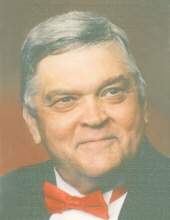 Fred Jarrell Jr., 85, of Heartland Villa Nursing Center in Lewisport, went home to our Lord and Saviour Jesus Christ on Thursday, September 23, 2021 at Owensboro Health Regional Hospital. He was born on August 15, 1936 to the late Belle DeRossett Jarrell and Fred Jarrell Sr. in Floyd County Ky.

Fred was a natural leader, generous, and demonstrated a strong work ethic in all of his areas of endeavor. He was raised in the Baptist faith and was active in church life and leadership, serving many times as a Sunday School teacher, on committees, and as a deacon. He was presently a member of Eaton Memorial Baptist Church and a long-time member of North Park Baptist Church in Evansville IN. Fred was merchant. He began being an entrepreneur as a youth and moved to the tri-state area in 1973 as the youngest Sears store manager in the country at that time. He went on to work for and retire from J.C. Penney Co. and also owned his own business in real estate appraisal. While living in Evansville IN, Fred was very active in the Lions Club in roles of leadership. He served his country in the Army and Army Reserves.

Fred was an avid reader, loved building things, was proud to have attended the University of Kentucky and greatly enjoyed UK athletics. Fred learned to be an auctioneer and loved buying, collecting, and reselling. He was always learning something new and was an amazing story teller. Fred was an encourager and always looked for ways to make things work better.

One of Fred's greatest joys was his family. He was survived by his lifelong sweetheart and wife of 64 years, Mary Ruth Day Jarrell; his daughter, Elizabeth (Dennis) McFadden; grandsons, Jeremy (Emily) McFadden of Henderson and Ben McFadden of Louisville; great-grandchildren, Maddox, Kate, and Clark; his brother, Jeffery (Reva) DeRossett of Lexington; and extended family.

Funeral services will be at 2 p.m. on Tuesday in the chapel at James H. Davis Funeral Home & Crematory and will be live-streamed at www.davisfuneralhome.com. Burial will follow in Rosehill Cemetery. Visitation is from 11 a.m. to 2 p.m. on Tuesday at the funeral home.