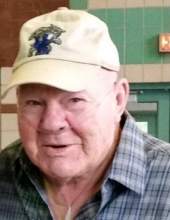 Harold Stevens, 79, of Owensboro died Friday, September 25, 2020 at his home. He was born in Hopkins County, Kentucky on March 21, 1941 to the late Fred Stevens and Goldie Hicks Stevens. Harold retired from Thompson Homes after 17 years of service. He was a UK basketball fan, loved Nascar and competing in motorsports. Harold liked working with his hands. There wasn't anything he couldn't fix.
In addition to his parents, he was preceded in death by his wife of 52 years, Fern Stevens, on December 21, 2012; a brother, James Stevens; and a sister, Frances Williams.
Survivors include his children, Harold "Bo" Stevens, Jr. (Sandra) and Christina Stevens (Robin); grandchildren, Courtney Lynn Blandford (Josh) and Sarah Elizabeth Stevens; siblings, Shirley Cates, William Stevens, Earl Stevens and Darrel Stevens; longtime friends, Billy Johnson, Tommy Osborne, the Boone and Coons families; and a special friend, Rachel.
At Harold's request, there will be no services. His ashes will be laid to rest with his wife in Rosehill Cemetery. A big thank you to Teresa Hamilton and the girls for all their help. The family requests that expressions of sympathy take the form of donations to Harold Stevens memorial fund, c/o Davis Funeral Home, 3009 Frederica Street , Owensboro, KY 42301.