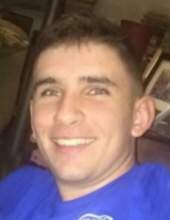 Sergeant Ian Hunter Taylor, 24, of Owensboro, passed away on Thursday, September 2, 2021 in Daviess County. He greeted this world on April 30, 1997 in Longmont, Colorado screaming, hollering and having a good time. He continued living his life in that manner for his short 24 years with us. Ian was the number one son of Timothy Wayne Taylor and Anne Marshall Collins Taylor, both of Owensboro. He was a volunteer firefighter and combat medic with the Kentucky National Guard. There was not an animal he didn't love and who didn't love him back. Ian could be found at times at a certain farm in Ohio County taking a nap with a horse as a headrest. He loved trucks, cars, motorcycles, and basically anything with a motor. It was a passion that filled his parents driveway so full, they had to park in the street. He loved his friends at The Pub and Ten.O.Six. Ian loved his friends deeply.

He was preceded in death by two grandmothers, Bonnie Taylor and Donna Finn Collins.

Funeral services will be at 12 p.m. noon on Tuesday in the chapel at James H. Davis Funeral Home & Crematory. Burial will follow in Elmwood Cemetery. Visitation is from 2 to 6 p.m. on Monday and after 10 a.m. on Tuesday at the funeral home.