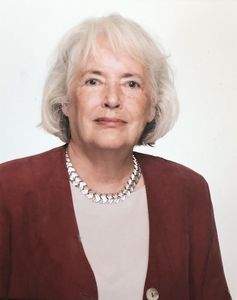 Wanda Jean Litsey Fruge', 91, went home to the Lord on Sunday, October 17, 2021. A nearly 70-year resident of Owensboro, she was born in Pellville, Kentucky on February 14, 1930, to Thomas Francis Litsey of Whitesville, Kentucky, and Josie Martine Baize of Pellville.

Jean loved Jesus Christ with all her heart, mind, soul, and strength. She was an avid student of the Bible, lived her life by the wisdom it gave her, and shared her knowledge of the Scriptures to many women over many years. She cared for the sick by working as an intensive care unit nurse for 25 years. She practiced her dedication to God, home, and country through active membership in the Daughters of the American Revolution, and served as regent for Gen Evan Shelby chapter. She cared for the vulnerable and elderly through the Ombudsman program. She enjoyed adventure – indeed, her life was a grand one. Traveling the world increased her love for people from all walks. This transferred to her open front door and extra seats at her table; she welcomed all with warm hospitality. She encouraged forgiveness and unity. Her kindness and artful words enchanted those who knew her. Her biggest investment was poured into her family who quite adored her. She will be so dearly missed.

Jean was preceded in death by her husband, William Nixson Fruge'; and brother, William Edward Litsey of Owensboro.

The funeral service for Jean will be noon on Thursday, October 21st at Glenn Funeral Home and Crematory. Private burial will follow in Rosehill Cemetery. Visitation will be Thursday from 9:30-noon at the funeral home.