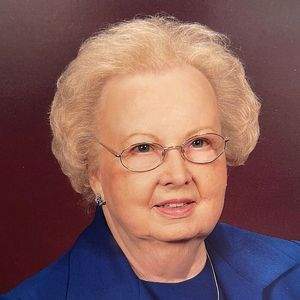 Jessie Roberts Rafferty, 94, of Owensboro died Monday, May 16, 2022 under the care of Hospice of Western Kentucky. She was born at home on August 25, 1927 to the late Otto Roberts, Sr. and GuyOla Knight Roberts. Jessie married James Herman Rafferty on August 25, 1945. She was a member of the 1946 graduating class of Daviess County High School. Jessie was past president of Sorgho PTA, a leader in 4H Extension, past president of Sorgho Homemakers, and was past president of Daviess County Homemakers. It was a great honor for her to receive the Green River Area Master Farm Homemaker title where she went on to become a member of KY Master Farm Homemakers in 1971. In this organization she served as secretary, treasurer, and later became president. She was only one of three Daviess County farm women to be selected on the state level in its 100 year history. Jessie was also involved in National Master Farm Homemakers, Country Women's Council and Associated Country Women of the World.

She was honored as a Kentucky Colonel. Her faithfulness to the Heavenly Father was shown through her volunteering at the Lancaster Avenue Baptist Mission and serving in many roles including teaching Sunday School at Pleasant Grove Baptist Church for close to 70 years.

Visitation will be from 10 am to 2 pm, Thursday, May 19 at Pleasant Grove Baptist Church, 5664 St. Rt. 56, Owensboro, KY 42301. The funeral service will
begin at 2 pm at the church with burial following in Elmwood Cemetery.

Care by Glenn Funeral Home and Crematory. Memories and messages of condolence may be offered online at www.glenncares.com.