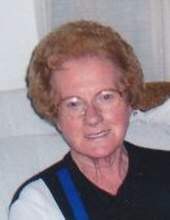 Jewell Kennedy Phillips, 88, of Owensboro, Kentucky passed away on December 11, 2021 at Baptist Health in Lexington. She was born on October 30, 1933 in Muhlenberg County to the late Robert & Era Kennedy. Jewell retired in 1975 after 26 years at General Electric Company.


Private graveside service will be held at Elmwood Cemetery. James H. Davis Funeral Home & Crematory in is charge of arrangements.