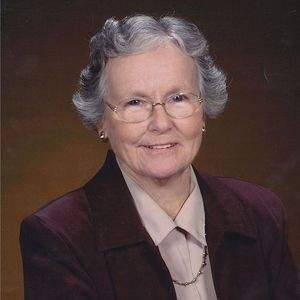 JoAnn O'Flynn Gipe went home to the Lord February 1, 2021, at her home, surrounded by her family and devoted caregivers. She was born June 18, 1927, to Jay Hardy and Stella Ambrose O'Flynn, of Owensboro. In addition to her parents, Joann was preceded in death by her sister Mary Rose Barr and brother Jay Hardy O'Flynn Jr. She attended Longfellow Elementary School and Owensboro Senior High School.
Upon graduation, she moved on to Lindenwood College in Missouri where she received a B.A. in Biological Sciences and continued to Detroit, Michigan to pursue graduate studies in Medical Technology at Henry Ford Hospital. At the conclusion of her graduate studies, she moved back to Owensboro where she married Fred N. Gipe.
JoAnn dedicated much of her time in this life raising her beloved children, Patricia Daic, of Destin, Florida and Thomas Gipe (May) of Owensboro. While raising her children, JoAnn was a devoted member to Settle Memorial United Methodist Church and a member of the Mary Lou Philips Sunday School Class, Bells, Choir, and MOPS.
JoAnn's other love was nature. She was very active in Girl Scouts and Camp Pennyroyal. JoAnn enjoyed anything in outdoors, was an avid gardener, and a bird watcher. When not in nature, one could find her in front of her piano, where she played avidly her entire life. Always a student of life, she learned about the dulcimer, where she quickly became a talented player and teacher of the unique instrument. JoAnn wrote music, made her own dulcimers, and entertained many with her group, the Yellow Banks Dulcimer Society.
"JoJo" was especially dedicated to her grandchildren, Alex (Sarah) Gipe and Michelle (Chad) Bourke and their children, Libby, Lucy, Mollie, and Tripp, all of Louisville, KY. Additionally, JoAnn was devoted to her numerous nieces, nephews, great-nieces, great-nephews, and cousins. An active mother, grandmother, and aunt she was, JoAnn could be found with her family during the summers at Indian Lake, local parks, close to a hiking trail, or teaching a loved one how to learn a new game. Simple and humble in her ways, JoJo was happiest in the simplest of times, surrounded by family, and in God's beautiful creation.

A Celebration of Life will be held privately for family and caregivers on Thursday, February 4, 2021 at Settle Memorial United Methodist Church. Care by Glenn Funeral Home and Crematory.

Expressions of sympathy may take the form of contributions to Kentuckiana Girl Scouts Council, Settle Memorial Good Samaritan Fund, Lifehouse Maternity Home, or Owensboro/Daviess County Habitat for Humanity.
Memories and messages of condolence may be offered online at www.glennfuneralhome.com.