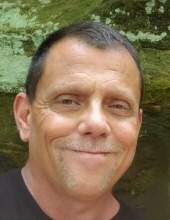 
John P. Duke, 52, of Owensboro, died peacefully in his sleep on Sunday, February 20, 2022 with his loving wife by his side. He was born April 30, 1969 in Owensboro to the late Eugene Stewart and Charlene Yvette Duke. Johny was a U.S. Army Military Police Officer and Gulf War veteran. He enjoyed fishing, writing, music, and tinkering. Johny was empathetic, loyal, and genuine. After overcoming so many obstacles throughout life, Johny found true peace and happiness in the last few years and spent his final years living his best life.

Visitation will be from 12:00 p.m. to 1 p.m. on Wednesday at James H. Davis Funeral Home & Crematory. Military honors will follow the visitation at 1:00 p.m.