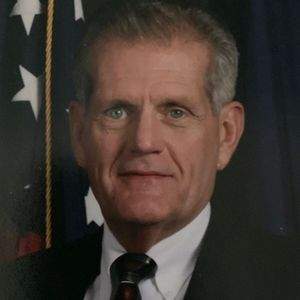 Throughout his life, Joe was always physically active including running in 5Ks, biking, walking his dog Dusty, washing and waxing his cars, and push-mowing his lawn in search of perfection. He also enjoyed taking vacations in Clearwater Beach, Florida for sun, sand and cuban sandwiches.

Joe was a member of Settle Memorial United Methodist Church and the Fraternal Order of Police Owensboro Lodge # 16.

Joe was a graduate of Kentucky Wesleyan College where he studied accounting. He began his career by following his grandfather into law enforcement to lead the Law Enforcement Division at the Kentucky Department of Transportation in Frankfort, Ky. When he returned to Owensboro, he first served as Purchasing Director for Green River Electric Corporation before joining the Daviess County Sheriff's Office.

Joe spent 35 years at the Sheriff's Office overseeing the collection of Daviess County property taxes. During his tenure, he modernized the tax collection process by introducing a computerized accounting and processing system into the office. He served as Chief Financial Officer and held the rank of Major when he retired in 2018.

Joe is survived by Barbara Sines, his beloved partner of more than 20 years, his son Richard (Beck) Glenn of Whitesville, and his daughter Sarah (Fred) Combs of Portland, Tenn. His grandchildren are Jordan (Jarah) Knott of Bowling Green, Rachel (Brady Blythe) Glenn of Whitesville, and Maddie, Drew, and Brady Combs, all of Portland, Tenn. He is also survived by his sister Marilyn (Bobby) Lowe and nephews Tim (Denise) Lowe and Kevin (Amy) Lowe, all of Owensboro.

Funeral services for Joe will be Noon Monday, March 7, at Glenn Funeral Home and Crematory with burial following in Elmwood Cemetery. Visitation will be from 2 PM until 6 PM Sunday and from 11 AM until Noon Monday at the funeral home.

The family asks friends to consider donating to the Fraternal Order of Police Owensboro Lodge # 16 through the link at www.fop16.com or mail to FOP 16, P.O. Box 401, Owensboro, KY 42302. Memories and condolences to the family can be shared at www.glenncares.com.