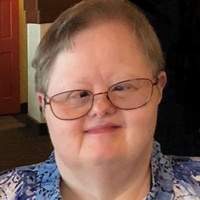 
She was born July 9, 1963 in St. Louis, Missouri, the daughter of Warren Niceley, Sr. and the late Mildred Humphrey Niceley.


Although LeAnn was born with Down syndrome, she thrived at High Point School, Ann Arbor, MI and later at the Porter Education Center in Adrian, MI, graduating at age 26. LeAnn learned to read and write, often writing letters to her sisters, reporting on her daily activities.

She participated in the CMH (Community Mental Health) Program in Adrian, also representing the clients for several years in regular board meetings with her mother. As CMH partnered with Goodwill Industries in Adrian, LeAnn joined the LINC2Community program. She was a vital member in the program until she moved with her family to Holt in 2018.


LeAnn had an infectious laugh, a quick wit, and made many lasting friendships in her life. She counted among her dear friends Scott, Kevin, Denise and especially Erik. She was a savant with country music performers and lyrics, and especially birth dates. She knew all her favorite country singers’ birthdates; and not only could she recall EVERY family member’s birthdate, but she could easily figure their current age!
She loved Special Olympics and competed for several years in swimming, amassing a collection of ribbons and medals. She went bowling with her peers at CMH and Goodwill and also her family, proudly keeping her score sheets for long periods of time. She gave herself “homework” every day for many years, which certainly increased her writing skill.


LeAnn was well-traveled throughout the United States with her family by plane, train, and automobile. She enjoyed the company of her foster sister, Nancy French for more than 21 years. She loved her birthday and holidays, anticipating the next one as soon as the current one concluded.


She will be placed beside her mother in the Veteran’s Mausoleum at Rosehill-Elmwood Cemetery & Mausoleum, Owensboro, KY.
Expressions of sympathy may take the form of a donation to the Special Olympics at https://give.specialolympics.org/michigan