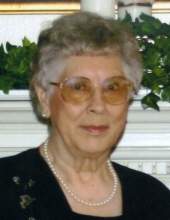 Marcheta Elizabeth Sumner, 89, of Owensboro, passed away on Monday, August 1, 2022 at her son's home. She was born September 17, 1932 in San Pedro, California to the late Walter and Nettie Voll. Marcheta was former co-owner of Hartford Handle Works, Hillside Hardware in Nuckols and West End Hardware in Owensboro. She was a member of Saints Joseph & Paul Catholic Church.

In addition to her parents, she was preceded in death by her husband of 57 years, Paul Patrick Sumner in 2008; and her sister, Patricia L. Kustes in 2020.

Funeral services will be at 12:00 p.m. Saturday, August 6, 2022 in the chapel at James H. Davis Funeral Home & Crematory. Entombment will follow in Rosehill Cemetery. Visitation is from 10:00 am until time of service on Saturday at the funeral home.