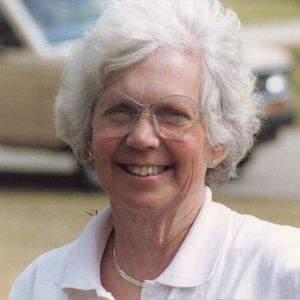 Martha Nell Lucas, a member of The Greatest Generation, passed away Monday, November 16, 2020 at The Carmel Home. She was 96. The daughter of the late Richard C. and Agnes Walters Brown, Martha was born in Chicago, though she considered that a mere technicality. In her heart, she was a native of Owensboro and a true Kentuckian. Following her graduation from Owensboro High School in 1942, she went to Louisville to join the war effort with the Consolidated Vultee Aircraft Corporation, later Convair. While there, a handsome young pilot from California asked her for a date. Martha accepted. The young pilot, Charles F. Lucas was soon flying combat missions in World War II, but their correspondence continued for five years. Upon his return, Lieutenant Lucas and Martha Nell Brown married on November 16, 1945.

Three children arrived over the next twelve years: Anne Lynne, Rick, and Nancy. Chuck became a petroleum engineer and Martha the engineer of everything else, including many enjoyable hours around the bridge table. The three Lucas siblings graduated from college and married; Anne to Lou Vorrasi, Rick to Yolanda Clark, and Nancy to David Cook and Steve Laynedecker. Martha and Chuck were grandparents to Brandon Lucas, Nick Vorrasi, Jill Lucas, Matt Lucas, Jenny Cook, and Lucas Laynedecker. Their dining table and the seats around it expanded to accommodate the growing family, later to include their nine great-grandchildren.

Memories and messages of condolence may be shared with her family at www.glenncares.com.