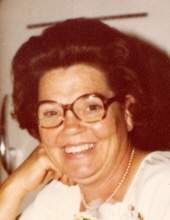 Mary Magdalene Adams Havener, 90, of Owensboro, died on Tuesday, April 28, 2020, at home under the care of Hospice of Western Kentucky. She was born January 26, 1930, in Oil Springs, KY to the late Kernie Adams (1956) and Dora Scott Adams (1961). She married, Jack, the love of her life on February 1, 1947. She was a member of Immanuel Baptist Church and Order of the Eastern Star. She enjoyed playing cards, reading, doing fill-in puzzles, Billy Jacobs art, listening to her wind chimes, spending time with her family, and most of all her personal time with God.

In compliance with health and public safety directives, services for Mrs. Havener will be private at James H. Davis Funeral Home & Crematory. Burial will be in Rosehill Cemetery.