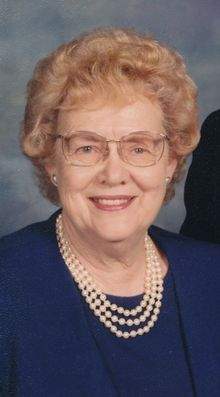 Mary Bryant Jarnagin Whitehouse, born April 26, 1926, in Muhlenberg County KY, entered the kingdom of heaven in the waning hours of November 15, 2020, at Owensboro Health Regional Hospital.
She was preceded in death by her husband of 66 years, Kenneth, and her eldest son John Kenneth.

Mary was very active her entire life. She started her own salon business in 1952 in the old Kresge building downtown and continued her career for 35 years. Additionally, she was deeply involved in many aspects of church life at Breckenridge Street Methodist church, which she cherished. She served on the board of the Friends of the Children at Mary Kendall Home and the Owensboro Help Office for many years and was also active in the Eastern Star.

A graveside service will be held at Elmwood Cemetery on Saturday,
November 21, at 3:00 PM.

The number of those attending the graveside service shall be with current health and safety directives. Family and friends shall wear appropriate personal protective masks.

Memories and condolences for the family of Mary Whitehouse may be left at www.glenncares.com