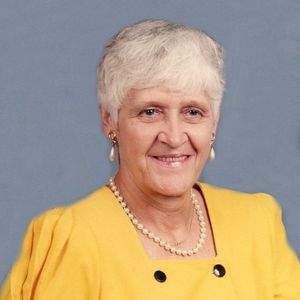 Ms. Nancy Bertram Adams, of Owensboro, died Friday afternoon at the ripe age of 87, after a long and full life. She was born on a sprawling tobacco farm in Etoile, in Barren County Kentucky, on December 3, 1934, to the late Mable and Mitchell Bertram.

Known lovingly by a variety of names in her lifetime - Nanc by her daddy, Ms. Adams by her students during her career as a public-school teacher - Nancy was perhaps most proud of her nickname, Granna, given by her beloved grandchildren.

Granna is survived by her younger sister, to whom she was very close, Martha Belle Griffin; two daughters, Martha Acquisto (husband, Joe) and Amy Orton; five grandchildren, Alex, Joseph, James, Jacob and Grace; and one great-grandchild, whom she loved to spoil, Jack, 9. She was also preceded in death by her husband, Marvin Adams. They were married from 1961 to the time of his death in 2002.

Nancy graduated from Temple Hill High School in 1952 and attended Western Kentucky University, where she earned a Master's in education. She began her time as a physical education teacher in her early 20s, first at Park City High School, and then at Owensboro High School, where she spent nearly all of her career.
Spunky and often a smart-ass, Ms. Adams was beloved by thousands of students over a span of decades. During her time as cheerleading coach in the 1970s, she grew close to not only her cheerleaders, but the players they cheered for. A devout and rambunctious fan of OHS sports, many senior high yearbook pictures taken of Ms. Adams in the 1970s and 1980s showed her with her mouth open, shouting (likely at a referee for making a bad call). For this reason, around 1976, Marvin stopped sitting with her at games.

Ms. Adams stopped teaching in the late 1980s and worked as a secretary at OHS for a time before retiring in the early 1990s. A lifetime educator and engaged citizen, she continued to volunteer and stay involved in school and community activities. Though she was a devoted Red Devil, she became a Daviess County Panther fan in the early 2000s to watch her grandchildren play sports, where she continued her yelling streak at basketball, baseball and soccer games.
Nancy's personality could fill up a room. She never met a person she couldn't strike up a conversation with. She was an aggressive nurturer of friendships, including her self-named longtime friend group, the Dirty Dozen. She cared deeply for her family. Her favorite holiday was Thanksgiving, hosted perennially by her closest cousin, Jo Anne Chenault. She loved her Sunday School class. She loved playing cards with her friends at One Park Place. She occasionally loved to gamble. She was an avid reader and loved writing letters. She loved John Wayne movies, M.A.S.H. and the Andy Griffith Show. She was strong and stubborn, and she had an impeccable memory and sharp tongue until the very end.

Please join us in celebrating the admirable way she lived her life. Visitation is from 3 p.m. to 7 p.m. Thursday, August 11 at Glenn Funeral Home and Crematory in Owensboro. On Friday, August 12, visitation is scheduled to begin at 11 a.m., and the funeral service will follow at noon. Burial will be in Rosehill Cemetery in Owensboro following the service.

Memories and condolences for the family of Nancy Adams may be left at www.glenncares.com