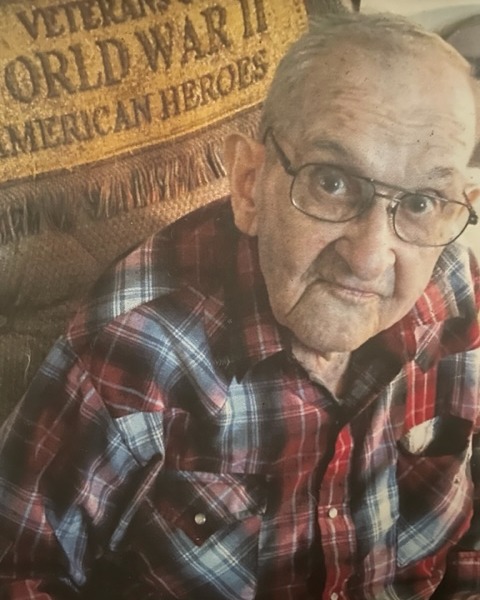 Noble H. Midkiff, 103, of Whitesville, Kentucky, passed away Friday, January 20, 2023, at his home on the same farm where he was born August 30, 1919, to the late Heber and Della Greer Midkiff.
Noble graduated from Fordsville High School in 1937 and attended Western Kentucky State Teachers College. He started teaching in a one room school house in Magan, in Ohio County, in 1939. He taught at Sorgho in 1941-42.
He married his sweetheart, Ada Tinius Midkiff, of Whitesville, on December 6, 1941. Pearl Harbor was bombed the next day.
Noble was drafted and left for the war June 26, 1942.
He served in the U. S. Army, 701st Tank Destroyer Battalion, in North Africa and Italy from 1942-1945. He was wounded three times, receiving a Purple Heart and two Oak Leaf Clusters.
He returned home July 25, 1945, one day short of 37 months of service. He was overseas for 33 months and ten days, without seeing his family.
Upon returning home from WWII, he taught one more year at Sorgho. He then returned to Western Kentucky and earned a B.S. degree in Agriculture. He received his M. A. and Rank I, also from Western.
He taught Agriculture and was FFA Advisor at Fordsville High School from 1950-1962. He was  Principal at Fordsville Elementary and High School from 1962-1970. He retired in 1975, after serving as Federal Coordinator of Ohio County Schools.
In addition to his parents, Noble was preceded in death by his wife Ada, and his brothers Valva Midkiff, Lincoln Midkiff, and Jim Greer.
He is survived by his daughters Rebecca Sue Jackson (Dave), and Jane Hoover Freer (Bill) and his son, James Larry Midkiff (Cathy).
He is also survived by his seven grandchildren David Jackson, Kim Brooks, Amy Sommers, Laura Sheppard, Jason Midkiff, Sarah Roberts, and Aaron Freer; his 10 Great Granddaughters; his sisters Esther Edge McCoy and Markley Freer; and several nieces and nephews.
The funeral service will be held at 11:00 a. m. Saturday morning, January 28, 2023 at Whitesville Christian Church.  Burial will follow at Rosehill Cemetery in Owensboro.
Visitation will be Friday, from 2-8:00 p. m. at Geary Funeral Home in Fordsville, and Saturday from 9 a. m. until the time of the funeral at the church.
In lieu of flowers, the family asks that donations be made to Camp Kum-Ba-Ya, the Western Kentucky Campgrounds for the Christian Church in Kentucky. They are going to furnish the camp’s new cabins with furniture etc. for year round camping.
To donate: Checks may be written out to Camp Kum- Ba-Ya, P.O. Box 1332, Madisonville, KY 42431 with “Furnishings Fundraiser” in the memo line.
GIVE ONLINE: Online donations may be received through Givelify. Go to https://www.givelify.com (search "Camp Kum-Ba-Ya")