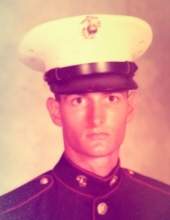 Robert Allan Bevil, 64, of Owensboro, passed away on May 30, 2020 at Owensboro Health Regional Hospital. He was born November 15, 1955 in Daviess County to Robert Ray and Martine D. Bevil. Robert was employed at Precision Roll Grinder where he worked as a machinist and was a U.S. Marine Corps veteran. He enjoyed fishing, watching NASCAR, playing bingo and working on cars.

He was preceded in death by his father, Robert Ray Bevil.