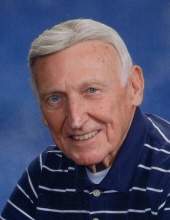 Russell Kenneth Settle, 95, of Owensboro, passed away on Thursday, October 22, 2020 at Owensboro Health Regional Hospital. He was born October 31, 1924 in McLean County to the late Roy Gates Settle and Clarice Hayes Settle. Ken retired from the International Union of Operating Engineers and was a member of First Baptist Church where he attended the Maverick Sunday School class. He was a U.S. Navy veteran serving during World War II. Ken was a member of the Masonic Lodge, NRA and a lifetime member of Operating Engineers. He enjoyed his exercise group at the Healthpark.

In addition to his parents, he was preceded in death by his wife, Gladys Settle; son, Russell Alan Sr.; and two brothers, Roy G. Settle, Jr. and Delbert Settle.

Funeral services will be at 11 a.m. on Monday in the chapel at James H. Davis Funeral Home & Crematory. Burial will follow in Elmwood Cemetery with military honors. Visitation is from 2 to 4 p.m. on Sunday and after 9 a.m. on Monday at the funeral home. There will be a Masonic service at 4 p.m. on Sunday at the funeral home. The number of those attending the visitation or funeral shall be within current health and safety directives. Family and friends shall wear appropriate personal protective masks.