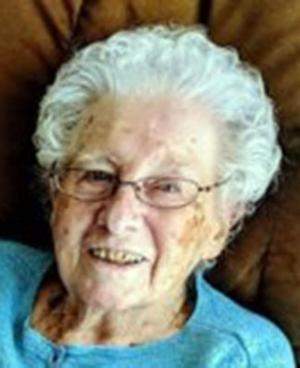 “In the end, it’s not the years in your life that count, it’s the life in your years.” —Unknown

If life is measured in the currency of love, Ruth was a wealthy woman!

A truly beloved grandmother, mother, wife, daughter, sister and friend went Home Wednesday, April 14, 2021, just shy of her 99th birthday, and we are grieving her departure and celebrating her full, joyful, exciting and well-lived life. Friends and family described her as classy, witty, candid, easygoing, optimistic, adventurous, an excellent cook, a lover of flowers and beautiful spaces and quietly devoted.

Ruth Constance Barnhart Holder was born in Winnipeg, Canada, on April 26, 1922, to loving and devoted parents Alice Winnifred (Rutherford) Barnhart and Carrol Eben Barnhart, joining a sister, Marguerite Elizabeth (Bette) Black. Shortly after, the family moved their home to Vancouver. Hers was a happy childhood, and in later years, Ruth often recounted stories from magical summers on the shores of Halfmoon Bay.

After graduating from business school in Vancouver and working several years for the supervisor’s department of the Royal Bank of Canada, in 1948 she made an adventurous move to San Francisco, with her best friend, Margot, to work for the British Consulate General.

It was there she met her handsome future husband, H. Scott Holder, at a party one fated evening. He had graduated from the Annapolis Naval academy and was assigned to a ship operating in the Pacific. Several months prior to marrying at the Treasure Island Chapel in 1950, the two lovebirds made an impromptu decision to elope in Tijuana, Mexico — a detail never disclosed to their families! The two of them were always laughing and exploring in those early years, making the most of a shoestring budget and building a foundation that would stand the test of time.

In the years to follow, there were several interesting military postings, one of which was Norfolk, Virginia, where they welcomed their first daughter, Winnifred Lou Holder. After that, they returned to Scott’s hometown of Owensboro, where their second daughter, Margot Elizabeth (Holder) Muffett, was born, and both girls were well-loved by their mother.

Ruth embraced her role as homemaker with gusto, throwing herself into cooking, sewing, gardening, entertaining and philanthropy work. She was a Girl Scout leader for both her girls, served as secretary of the Penny Royal Girl Scout Council and also worked with the Owensboro Concert Association and the Theatre Workshop of Owensboro, helping with props, ticket sales and getting her husband to play rehearsals on time! When her girls grew older, she took up weaving, painting, stained-glass making and other arts. Through it all, she kept at the things she loved — playing golf, swimming, spending time with close friends, attending the symphony, local theatre productions and Stratford Shakespeare Festival, traveling and making life special for everyone in her sphere. Later in life, her two favorite places were the Western Kentucky Botanical Gardens and the Riverfront Park, both in Owensboro.

In the last 20 years of her life, Ruth faced and conquered many health and personal challenges with grit, determination, a can-do spirit and a smile. Those of us fortunate to be with her through these times saw a woman sure of herself, confident, kind and always hilarious! We will miss her terribly but know her memory and legacy will stay with us always.

Ruth and Scott have enjoyed their five grandchildren, Christopher (Jen) of Okemos, Michigan, Emily of Kalamazoo, Michigan, Jason (Mackenzie) of Charlotte, North Carolina, Justin of Minneapolis and Joel (Rachel) of Lansing, Michigan; and a wonderful son-in-law, James Muffett of Eaton Rapids, Michigan. In addition, she had six great-grandchildren, Isaiah, Ethan, Elijah, Adelaide, Tobias and Elliott; along with a nephew, Brian Black; and niece, Susan (Black) Pope.

The memorial service will be at noon Saturday at Glenn Funeral Home and Crematory, where visitation will be from 10:30 a.m. to noon Saturday. A family committal ceremony will be at Rosehill Cemetery.

The number of those attending the visitation or service for Mrs. Holder shall be within current health and safety directives. Please see signage at the door regarding personal protective masks.