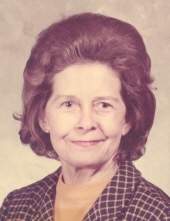 Viola Mae Gaddis Cecil, 103, passed away October 21, 2020 at Hillcrest Nursing Home in Owensboro, KY. She was born May 22, 1917 in Hunter, Arkansas. Her parents, Ida Bell Vanover Gaddis and John Henry Gaddis were from the Panther area in Daviess County and went to Arkansas to homestead.

She retired from GE in 1981 after 34 1/2 years. During WWII, Viola worked in Evansville, Indiana as a "Rosie the Riveter" making airplanes for the war. She was a Lady Kentucky Colonel and was a member of Third Baptist Church.

Viola was always happy when she had a lot of people around her. She was always generous, and known for her love of family, especially the young people and children. She enjoyed having out of town relatives staying in her home. She was a very good cook and could put a meal on the table in minutes and could always set an extra plate. She worked at GE and came home and helped her husband in the garden picking vegetables for the next day. Through hard work and thriftiness, Viola and her husband built a home and thriving plant and vegetable business, "R.E. Cecil's Greenhouse and Produce" located on the Veach Road. She was a loving and devoted wife and mother and a special "Grandma".

She was preceded in death by her husband of 57 years, Robert E. Cecil; her parents; brothers, Louis Calvin "L.C." Gaddis and Melvin Gaddis; and a great-great-granddaughter, Evalyn Grace Russ.

Funeral services will be at 10 a.m. on Saturday in the chapel at James H. Davis Funeral Home & Crematory. Burial will follow in Rosehill Cemetery. Visitation is from 4 to 7 p.m. on Friday and after 9 a.m. on Saturday at the funeral home. The number of those attending the visitation or funeral shall be within current health and safety directives. Family and friends shall wear appropriate personal protective masks.