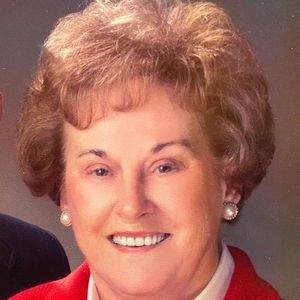 Wanda Jean (Brown) Volk, 91, of Owensboro, passed away February 14, 2021 at Owensboro Health Regional Hospital with her son and daughter by her side. Wanda was born in Daviess County on April 23, 1929 to the late Orville and Mary Agnes Brown. She was the eldest of four children.

After graduating from Daviess County High School, she met the love of her life, Joseph E. Volk Jr. They were married for 65 years. They reared their three children in Owensboro, KY. Wanda's family meant the world to her. You could always count on her to be there for support no matter the need. A day never went by that she didn't talk to a family member to see what was going on in their lives. She had the most caring heart.

Wanda was a long time and faithful member of Trinity United Methodist Church for over 50 years who attended regularly until she was unable to attend. She taught Sunday School, served on several committees, and helped with bereavement dinners. Wanda was a kind, gentle and humble Christian. She and her husband hosted Sunday dinners in their home for some of the students of Kentucky Wesleyan College that attended Trinity United Methodist Church.

Christmas was Wanda's favorite holiday. She went all out in decorating, buying gifts for everyone, and cooking a large meal that was sure to have everyone's favorite dish.

A special thank you to her three caregivers; Barbara, Kim and Janet B.

Services are private. Care by Glenn Funeral Home and Crematory.

Those attending the visitation and funeral service shall be within current health and safety directives. Family and friends shall wear appropriate personal protective masks and social distance.