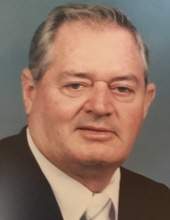 William Leo (Bill) Clark, 89, of Owensboro died Friday, September 10, 2021 at Owensboro Health Regional Hospital. He was born on February 12, 1932 in Irvington, Kentucky to the late James Clark and Eula Bessie (Goodall) Clark. He was married to Betty Jo (Gordon) Clark for 62 years and she preceded him in death on June 13, 2012. He was also preceded in death by brothers, Albert Clark, Irvin Clark, and Ray Clark; and a sister, Marlene Clark.

Bill was a member of the First Christian Church, Disciples of Christ and Cumberland Presbyterian Church of Owensboro. He served six years in the National Guard and worked for Modern Welding and Green River Steel Corporation. Bill enjoyed working in his garage and building and creating many items with his welding skills. He enjoyed travel and camping and was a member of the local camping club. He was a member of the Owensboro Museum Rock Club.