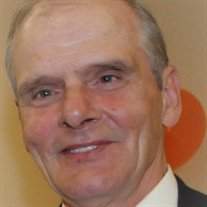 William Albert Heffelfinger, age 71, died in Louisville, Kentucky on Wednesday, March 18,2020. He graduated from Owensboro High School, where he was an All-State basketball player, and also lettered in baseball. He went to Furman University on a basketball scholarship. He worked as an operator at the Louisville Slugger Museum & Factory, and served as Recovery Dynamic Coordinator at Our Father’s House in Louisville.
He is survived by his brothers Robert (Kathryn) and Dayton (Creda), cousins, nieces and nephews. His mother, Billie Hicks Heffelfinger, and father, Clarence Albert Heffelfinger, predeceased him. Memorial services in Louisville and Owensboro will be announced at a later date. Expressions of sympathy can be made through donations to Our Father’s House, 2310 W. Jefferson St., Louisville, KY 40212